Micro-celebrity Practices in the Commemoration of Deniz Gezmiş

It was 6 May 2022 and, like hundreds of other people in Karşıyaka Cemetery, Ankara, I was visiting the tomb of the Marxist-Leninist martyr Deniz Gezmiş to observe the 50th anniversary of the execution of Gezmiş and his two other comrades. Most of those visiting the cemetery that day were leftist or centrist partisans, waiting for hours for their cortège’s turn to commemorate the young martyrs. The groups succeeded each other in giving public speeches by Gezmiş’ grave, and many played music for the martyrs. The soundscape of the cemetery was made up of protest slogans of solidarity, calls to not forget Gezmiş and protest songs such as the Turkish versions of the Internationale and Bella Ciao.

The last group I was watching played a Turkish folk song from someone’s phone, after its members took selfies and photographs with the tomb like many other visitors. An older man had just announced that the group would sing along to Deniz Gezmiş’ “favourite song”. A woman standing next to me exclaimed: “No! This is not his favourite song”. To my knowledge it wasn’t known as Gezmiş’ “favourite song”. Quickly, the man initiating the singalong added that it was “one of his favourite songs”. I pointed out to the young woman next to me that the man had corrected himself and we got talking. She told me to speak to the young man next to her, who wore a green parka lined with fur just like Gezmiş himself: “he knows everything about Deniz”, she said. It turned out that he was managing a Deniz Gezmiş account on Instagram, and the duo had travelled to Ankara to livestream the commemorations for their viewers. I asked the woman if they were there with a group, and she said, “no, we are independent”. I told her that I too was “independent” and was there for research. There we were, three “independent” youths observing the different partisans’ commemorations. Whereas they could claim to know Deniz’s favorite song, my confidence lay in knowing which cultural products had made claims about Gezmiş’ “favourite songs”. 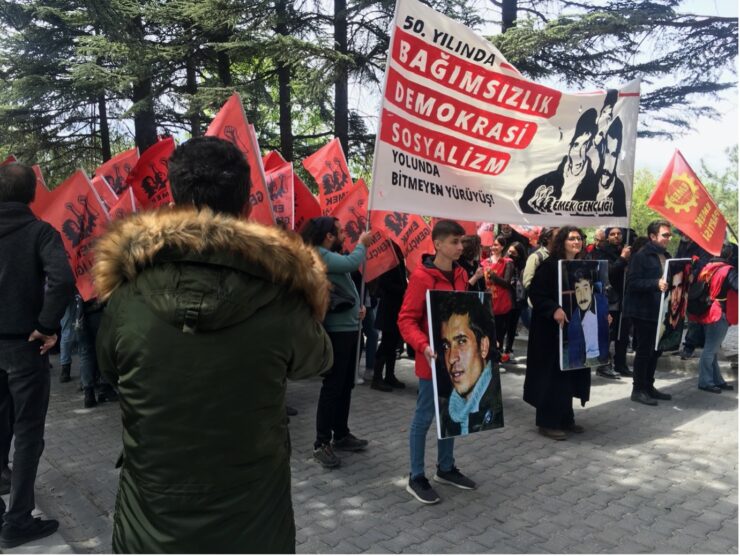 A man in a ‘Deniz Gezmiş parka’ livestreams the commemorations. 6 May 2022, author’s own.

In my recent work on youth and memory, I’ve looked at the ways in which Deniz Gezmiş has been used for the political socialisation of youth. But my analysis necessarily left out the “independents”, the nonpartisans, the fans. How could we, students of cultural memory and social movements, account for the framing of movement icons like Gezmiş as intimate others whose favourite song is worth knowing? Was there a way to understand these “independent” and seemingly “apolitical” relations to historical revolutionaries? Time and again, the iconisation of figures like Che Guevara and their place in the popular imaginary have been condemned as the commodification of their memory. Many have pointed out the irony of a Marxist figure being inserted into the circuit of capitalist commodities. But if we could suspend this judgement, is there a way to understand how Che Guevara t-shirts and Deniz Gezmiş fan pages mediate successive generations’ relation to revolutionary pasts?

The existence of celebrity culture – in which revolutionary “icons” are framed as historical celebrities – offers one explanation for numerous fan pages for Deniz Gezmiş. However, celebrity culture is not an ahistorical framework that solely refers to the “famous” or the “well-known”, or in our case, the “most memorable”. It provides a frame for making sense of social relations between mediated lives and spectators, through genres like gossip, and is in constant flux due to changing media regimes. We simply cannot equate the historical celebrity of the 1990s to the historical celebrity of the 2020s, even if that celebrity is the same person. What does the celebrification of historical figures mean in terms of cultural memory then, when we take memory to be always mediated, and thus structured by given media regimes?

In the 1980s, during the neoliberal restructuring of Turkey, Deniz Gezmiş was framed by the celebrity culture of tabloid magazines. One very influential magazine in this era was Nokta, which claimed to be a political weekly while packaging political news as entertainment – its covers famous for their sexualised images of women. This was in the aftermath of the silencing era of the 1980-1983 military junta of Turkey, when politics was still a dangerous topic, and Nokta was an independent liberal voice that safely broke the silence.

Using celebrity as a framing device, Nokta rendered the remembrance of Gezmiş intelligible outside of the political interpretation established by earlier leftists, who framed him as a revolutionary martyr. Take the case of Nokta’s reporting on Erdal Öz’s The Night His Rose Faded (1986), which was a reworked edition of Deniz Gezmiş Speaks (1976), a work that had been central to his remembrance in the previous decade.

Nokta kept The Night His Rose Faded in their bestsellers chart for several months, publishing a series of extracts which foregrounded the sensual over the factual. These started with quoting Gezmiş’ ventriloquized description of the gendarmerie following him before his final arrest. From Gezmiş’ speaking position, the event is described like a chase scene in a thriller movie, a spectacle watched by passers-by. This chosen fragment is told in the present continuous tense, which creates an effect of immediacy and suspense. Everybody comes out of their houses to watch, a woman calls her husband in for dinner saying that he can watch it later, and children clap and eat sunflower seeds as Gezmiş fires his gun – a common practice in open-air cinemas at the time.

Nokta followed up this extensive quote from Öz’s book with a narrative intervention, announcing the chase ended with defeat. They released the tension by introducing Öz, who was sent to the same prison as Gezmiş, as another main character: “From that moment on, Öz had already started talking to one of the protagonists of the novel” (ibid.). Nokta’s interwoven presentations of Gezmiş as the protagonist of a novel and as a movie star, are sustained in the rest of their reportage which crafts a pseudo-interview with this historical celebrity by quoting the character Deniz Gezmiş in Öz’s book. Speaking to Nokta readers, Gezmiş gains a new public image: the celebrity whose action scenes are cheered on by spectators, who “loves Beethoven as much as Marx”, who “cherishes drinking cold beers with lovers” (Nokta 1986, 9 October, pp.70-71). The magazine’s audience could make sense of this new presentation of Gezmiş, as reporting on celebrities and their intimate lives was what Nokta did.

This version of Gezmiş as celebrity was the product of the media regime and political climate in Turkey in the 1980s. Celebrity culture has changed since then, so has politics.

The “celebrity as larger-than-life” has been “democratized” with the rise of reality TV and the internet. The new attention economy of social media has given rise to what Alice E. Marwick has termed “micro-celebrity practices” in “You May Know Me from YouTube: (Micro-)Celebrity in Social Media”. “Micro-celebrity,” she writes, “is a set of practices and a way of thinking about the self, influenced by the infiltration of celebrity and branding rhetoric into day-to- day life, rather than a personal quality”. Within this new paradigm of micro-celebrity, both Deniz Gezmiş himself and the man in his Deniz Gezmiş parka livestreaming on Instagram fits in the frames of celebrity. Fans become the practitioners of micro-celebrity and the partisans taking selfies with Gezmiş’ grave are not completely outside of this new culture either. This has consequences for memory cultures.

New types of remembering subjects are changing the meaning of the life that is remembered. The man with the Deniz Gezmiş parka, live streaming the contentious commemoration of a defeated revolutionary past, does not operate in a celebrity culture organised by 1980s gossip and lifestyle reportage anymore. His relation to the revolutionary past is a more intimate one, with numerous historical layers of meaning. He records and publicises as an “independent”, but not as a liberal “individual”. As opposed to the earlier decades of post-political consensus, he also operates in the emergence of what Anton Jäger has identified as hyper-politics. Hyper-politics, in Jäger’s words, is characterised by “its specific focus on interpersonal mores, its incessant moralism, and its incapacity to think through collective dimensions of struggle”. The position of the “independent” might be a refusal to participate in this emergent political culture, all the while mastering its media regime. 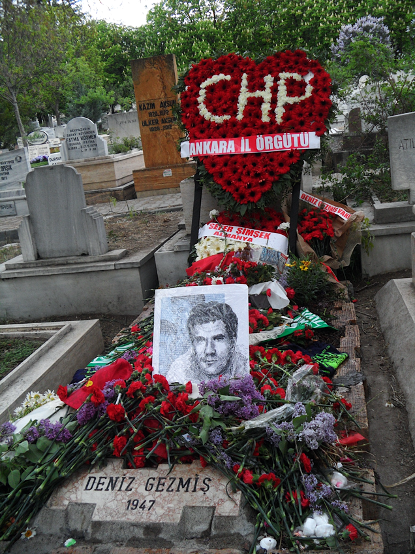 Gezmiş’ grave after the commemorations. 6 May 2022, author’s own.