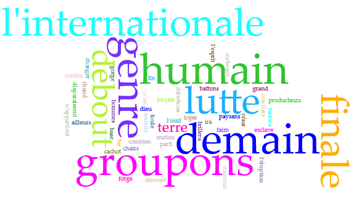 In 1903, British suffragettes adopted the motto “Deeds not words” to signal their tactical shift from peaceful protest to a more direct and violent repertoire of action. Despite the popularity of this refrain over the century that followed, it is clear that words play a pivotal role in political activism. They are used to frame injustice, establish worthiness and authority, connect chanting crowds, and claim new speaking positions. Moreover, investigations into the “significant, binding words” of modern discourse have frequently focused on the language of political change and dissent (Williams 1983, 15), as the Keywords projects following in the footsteps of Raymond Williams’ seminal publication attest (Rodgers 1987, Jeffries and Walker 2018, Leary 2019).

This expert meeting seeks to gather scholars across disciplines to investigate a key aspect of the power of words which is frequently overlooked or left implicit: the way in which words mediate actors’ relationship to the past, and to canonical events in the transnational history of political activism. In doing so, it looks to make a significant contribution to the study of the “memory-activism nexus” (Rigney 2018), and to respond to the contemporary sense of urgency around the politics of language (see, for instance, Modest and Lelijveld 2018).

The gathering is organized around the hypothesis that keywords, slogans, and historical shorthands play a key role in structuring traditions of political activism. Slogans like ¡No Pasarán! (“they shall not pass”) travel across time and place to mobilise crowds. Shorthands like the soixante-huitards or Forty-Eighters function as proud monikers to cement generational unity and import particular narrative frames into debates. Retrospective realignment, or “rhetorical redescription” of canonical events in modern vocabulary (Skinner 1999, 67), such as the recent relabeling of the Tulsa Race Massacre in the Library of Congress (OU, 2021), creates new narrative continuities.

Studying activist language use through the lens of cultural memory, this event seeks to advance recent work in social movement studies, memory studies, conceptual history, and discourse analysis. The meeting will eventually result in a special issue or edited volume of contributions which aims to:

Contributions may address cases or questions of methodology, including: