On 15 September 2020, the Spanish Council of Ministers approved a draft bill on the Law of Democratic Memory which acknowledged the crimes committed during the Civil War (1936-1939) and the Francoist military dictatorship (1939-1978). Despite the magnitude of the Franco regime’s violence and the deep scars it left on the social and psychic life of the country, the victims of Franco’s regime have yet to be acknowledged by the Spanish State. Based on the premise of ‘Never Again!’ – a slogan associated with the Holocaust and other genocides, particularly in Argentina – several civil society organizations continue to regard the Spanish case as a paradigmatic for the occlusion and forgetting of historical injustice. In 2014 the UN Special Rapporteur Pablo de Greiff drafted a very critical report which urged the Spanish government to change their approach to the country’s memory politics. The report noted that the government had started “from a position deliberately publicised by the Franco regime, which for decades prevented any open or direct confrontation with the past”. But the pressure exerted by memory activists has been crucial to reopening debates about Franco’s violent legacy and the Spanish Transition to democracy, leading to new understandings of the past. The case of Spain shows how dealing with historical injustice is not only about the past, but also about the present. Debates about remembering and forgetting also provide a resource for protest: they drive the struggle for a deeper political transformation and for social justice in the present.

Given the lack of institutional support for Franco’s victims since the transition to democracy following his death, it is no accident that the most relevant initiatives taken to address the country’s problematic and violent past have come from civil society. One of the first and most important organizations, the Association for the Recovery of Historical Memory (ARMH in Spanish), was created in December 2000 by relatives of people who had been killed during the war and in the immediate post-war period. The main target of their campaigns has been the location of missing people and the excavation of unmarked common graves. This is unsurprising given that Spain, of all democratic countries, has arguably the largest number of unmarked graves as a result of the mass killings carried out by the Francoists. Subsequently, many other groups were created across the peninsula. While aiming to achieve truth, justice, and reparations and to avoid the recurrence of the violations of human rights that took place between 1936 and 1978, these groups also represent a wide variety of constituencies: political prisoners, exiled citizens, mothers of stolen children, LGTBQ+ activists, and victims of police violence. If some memory activists are primarily focused on justice for their family members or themselves, many of them are also involved in campaigning for particular causes in the present. They become relevant voices of different social movements – as was the case in the feminist general strikes of 2018 and 2019, the pensioners movement or the ‘refugees welcome’ initiative. 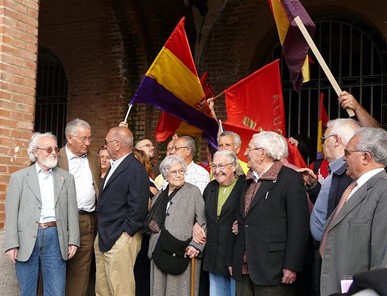 In their campaigns for historical justice, they also highlight the existence of ongoing violence towards vulnerable populations. Sexist violence, exile, racism, war or authoritarianism are analysed through a historical lens. This not only enables a new understanding of the past but also a new understanding of violence in a contemporary context. Memory wars in Spain have also been linked to a strong criticism of the authoritarian features inherited by the current political system, leading to the emergence of social movements that have been interpreted as an impugning of the Spanish Transition to democracy, as in the case of the 15M movement in the spring of 2011. It is worth remembering that these protests around 15M spread slogans like “they call it democracy, but it is not”, and expressions like “the regime of 1978”, that implicitly associate the current status quo with the languages and memories of the earlier Francoist era. 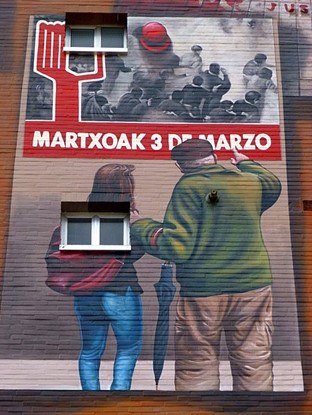 Wall painting dedicated to the Victoria-Gasteiz Massacre (in which five workers were killed by the police during a general strike on March 3, 1976).

Through their enormous efforts, communities of memory activists have succeeded in placing the past at the core of political debates in Spain. Certainly, the last year or so has been quite extraordinary from the perspective of struggles over memory. The removal of Franco’s remains from the Valley of the Fallen mausoleum, the government’s commitment to accelerating exhumations, or the definition of the crime “apology for Francoism”: all of this gives memory activists reason to hope. But conservative and extreme right parties have also fought back against these developments. In January 2020, Madrid City Council removed the commemorative plaques that were part of a memorial that the previous government had begun to erect in the Almudena cemetery. The memorial paid tribute to the 2,934 individuals who were executed in cold blood by the Franco regime between 1939 and 1944 and included some verses by the well-known poet Miguel Hernández who was sentenced to death and died in prison. More recently, on 15 October 2020, the same City Council tore down a plaque in memory of Francisco Largo Caballero, who was the Prime Minister of the Republic during the civil war. Only four days earlier, his statue had been also vandalized with graffiti saying “assassin” and “no reds”. Far from being resolved, the so-called ‘memory wars’ seem to be more alive than ever, playing out in a context of economic and social polarization in which the past is never dead. 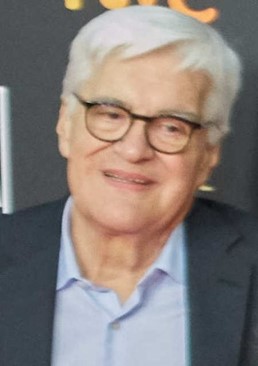 David Beorlegui Zarranz is Post-doc researcher at the University of the Basque Country, and visiting researcher at ReAct September -December 2020