Why Monuments Matter (And When They Don’t) 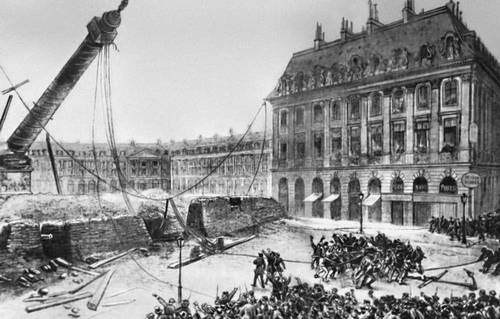 The Demolition of the Vendôme column, 1871; anonymous drawing.

In the centre of Paris on the afternoon of 16 May 1871 a huge crowd was waiting to the sound of the Marseillaise. Around a quarter past five, an expectant silence fell on the company as, after hours of preparation, the sign was given for the cables to be pulled. All eyes were turned towards the “monster” which first “shuddered, swayed, and resisted” before finally succumbing in a cloud of dust and collapsing to the sound of an “electrified” crowd shouting Vive la République! Vive la Commune! And so, the Vendôme column, symbol of Napoleonic militarism and designed to echo the Trajan column in Rome, was destroyed on the orders of the Commune – to the great joy of the Communards who celebrated the moment by posing for posterity over the ruins of Napoleon. 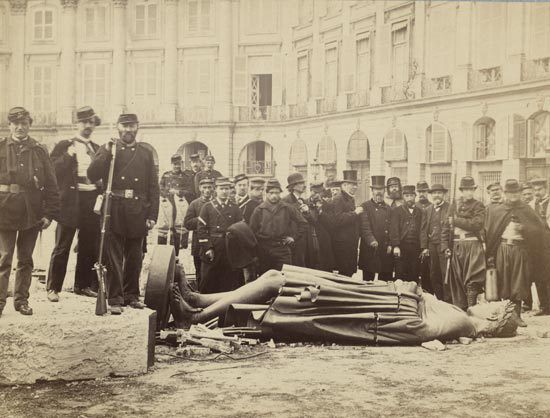 Communards posing at the ruins of the Vendôme column, 16 May 1871. Photograph Auguste Bruno Braquehais. Reproduced courtesy of the Bibliothèque nationale de France.

As the visual record shows, the demolition of the Vendôme column was a huge and solemn undertaking in which symbolism and materiality were deeply entangled. Dismantling a 44-metre high column, without injuring anyone, was no simple task and took weeks of planning. By the time everything was ready, state troops were moving in on the city; indeed just seven days later, thousands of Communards would be slaughtered in the infamous ‘Bloody Week’. Thus ended an extraordinary two-month experiment in alternative living.

Given the sheer scale of the undertaking and, above all, the real and present danger to the very survival of the Commune from the encroaching army, the question which keeps arising from any recollection of this event is: why bother? Why go to all this trouble to get rid of a stone pillar when people were facing starvation and bayonets? One way or another, the case brings home the fact that monuments do matter. Given the current wave of attacks on statues associated with racism, inspired by the Black Lives Matter movement, the case of the Commune provides not just evidence that monuments matter but also food for thought on why they do so.

As the detailed planning indicates, the demolition was not done on impulse but after much deliberation. On 12 April 1871, the revolutionary council had formally decreed that the presence of the monument could no longer be tolerated. The problem was not just its meaning, but its materiality. Its looming presence was an irritant: offensive. As the official decree for its destruction explained, it was (note all the verbal forms): “an affirmation of militarism, a negation of international law, a permanent insult to the vanquished on the part of conquerors” and accordingly, “a perpetual attack on one of the three great principles of the French Republic – fraternity.”

In the last weeks there has been a lot of heated talk about the necessity (or not) of removing offensive monuments. Most of it has concentrated on what the monuments ‘stand for’ and the actions of the persons they depict, with little acknowledgement of why monuments in particular become the target of outrage and why regime change and monument removal have long gone together. Jane Bennett has used the term “vibrant matter” in her eponymous book (2010) to describe the affective power of materiality, and how it facilitates or impedes participation in public life. As “vibrant matter,” monuments don’t just have symbolic value but through their very material presence – their size, their location, and their design – they also exercise power.

This means that they may generate pride, but also that they can insult, offend, bully. The bigger they are (and many of them were designed to be very big) the greater their power to have a public impact. As long as they are left standing in public spaces, often so centrally placed as to force people to move round them to reach their destinations, they are not obsolete. They continue to express and uphold values – of militarism as in the case of the Vendôme column, of racism in the case of statues to the Confederacy – and cannot be dismissed as sanitized or ‘beautiful’ relics of times past. To leave them intact and in situ is to be complicit in the perpetuation of historical injustice. Not just in an abstract sense, as a matter of principle, but in a way that intrudes physically into the very texture of public life.

So, should all toxic monuments be demolished? The Commune certainly thought so. However, demolition encourages people to forget the past and this is not necessarily a good thing if it means eliding uncomfortable truths. Luckily demolition is just one of the many options available. Critical vandalism is a good alternative for decommissioning monuments by ‘jamming’ their meaning without erasing their history (the guerilla-art reworking of the monument to the Soviet army in Sofia offers a case in point). Alternatively, one can re-locate an offensive monument to a museum where it becomes reduced to a display object, juxtaposed and brought into conversation with other relics of the past and with contemporary comment. The real point of discussion then is not if toxic monuments should be left as they are, but rather which are the best practices for changing their status, their meaning, and their impact. And new practices are emerging all the time. 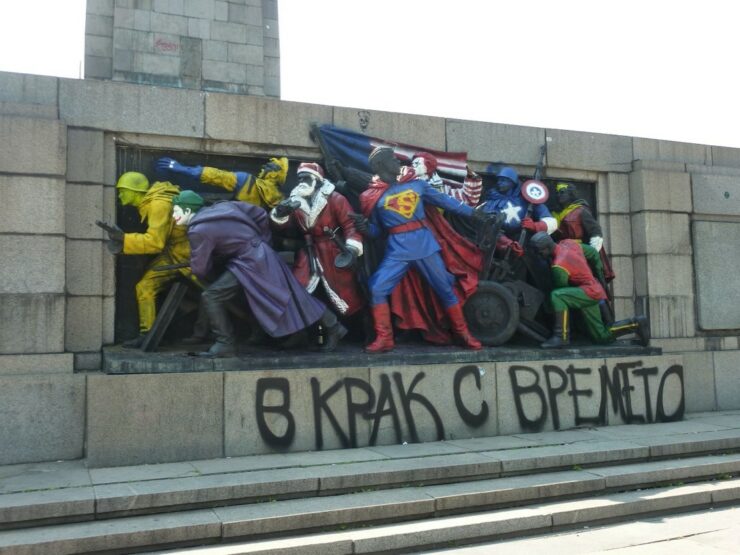 So far so good. But there is a hidden danger in all of this; namely, that since monuments are such vibrant objects they risk becoming a distraction. Important as memory is, too much attention to monuments can end up deflecting activism away from real-world threats and the need for systemic change. Iconoclasm may give people the illusion that the underlying problems which make a statue offensive disappear when it is destroyed or refigured, that changing symbols is a goal in itself. While demolishing the Vendôme column was undoubtedly a huge morale booster for the people of Paris, the Commune fell short in boosting its own defences. 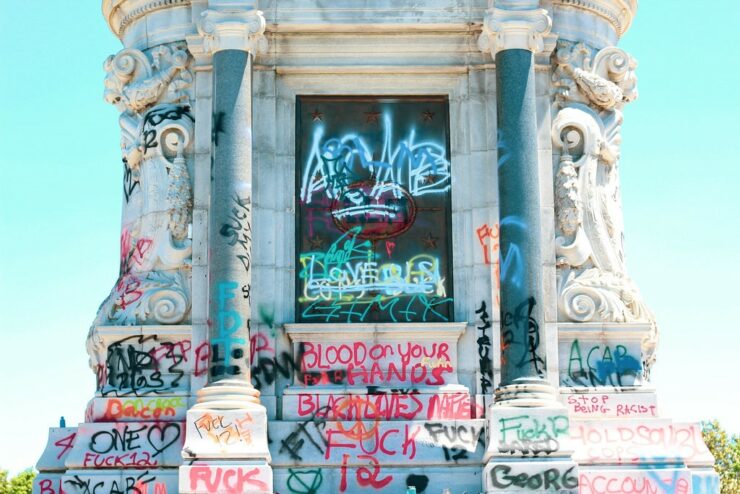 The description of the destruction of the Vendôme column is drawn from Bernard Vassor’s La chute de la colonne Vendôme (2005), based on multiple eyewitness accounts; https://www.terresdecrivains.com/La-chute-de-la-colonne-Vendome; also on John Merriman, Massacre: The Life and Death of the Paris Commune of 1871 (2014). To hear more about the relationship between monuments, memory and activism, listen to Ann Rigney’s talk ‘The Afterlife of Hope: How the Killing of Demonstrators is Remembered’ on the Connecting Memories Podcast.