‘My Body My Choice’: Why the Anti-Lockdown Protesters are Appropriating Memory

While Trump is egging them on and Bolsonaro has even joined them and called them “patriots”, the protesters taking to the streets against the coronavirus lockdown are mobilizing more than just nationalist rhetoric. They are weaponising feminist slogans from the abortion rights movement. The question is: why? Why would anti-lockdown protests become a site of debate about who ‘owns’ certain slogans?

Last month, several images emerged of women holding signs with the famous slogan ‘My Body My Choice’ in anti-lockdown protests in American cities like Harrisburg and Austin. While in Virginia, one protester adapted the phrase for a sign that read ‘My Body, My Choice To Work’: appropriating the memory of the women’s movement with devilish irony for the rallying cry of a movement teeming with pro-life members, who are fighting for their right to go out onto the streets and get back to work. In a sense the anti-lockdown protester is like a coronavirus version of the strikebreaker, choosing personal gain over solidarity. Another variation popped up in Pennsylvania where a protester punned on the original slogan to assert her right to catch the virus with a sign that read “My Health, My Choice”.

As specific slogans spread across the globe and are taken up by protesters over years, decades or even centuries, they become carriers of the cultural memory of past struggles. As such, ‘they become the ‘property’ of particular movements, and the memories they accumulate and carry over can be used strategically by activists in the present. Academics working on cultural memory and social movements have mostly argued that slogans help in claim-making and identity-building. Memories of movements can also be mobilized to give legitimacy to a protest since it allows activists to place themselves in a longer protest tradition in order to assert the historical importance of their action. But a new and pressing question for movement and memory scholars to address is: what happens when a slogan is appropriated by a political opponent and starts to function as a direct attack on that movement?

Gaining currency in the 1970s, the original slogan ‘My Body, My Choice’ has been widely adopted and translated by feminists across the globe in the fight for self-determination over their bodies. It is used not only in the context of reproductive rights but also in reference to sexual choices and other women’s rights issues. It has a long and international afterlife. In the past decade, for instance, it has also been taken up by the international slutwalk movements. But the slogan hasn’t just crossed borders and connected different feminist issues, it has also travelled across ideological divides. In the summer of 2019, it was already taken up in the US by the anti-vaccine movement. As journalist Marie Solis shows, the slogan didn’t simply ‘travel’ to another issue by chance but was consciously mobilized since it helped protesters to politicise vaccination, until then considered an individual decision, by affiliating itself with a broader political movement while at the same time corroding and weakening “the abortion rights appeal”. 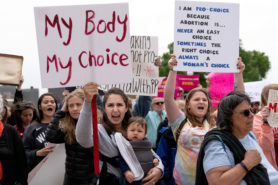 The slogan at a Stop Abortion Bans Rally in St Paul, Minnesota. Photo by Lorie Shaull

So, what exactly is going on when this slogan is used by anti-lockdown protestors? What’s at stake here is not just a battle over bodily autonomy, it’s a strategic fight of political appropriation where slogans are the battlefield. The New York Times called the ‘Reopen America’ protests a culture war, and described its warriors as rifle-toting, American-flag-waving, self-proclaimed underdogs, who combine supposedly “ironic” swastikas with “chants to lock up female Democrat governors”. They are not exactly feminists then. In fact, Vice magazine’s Susan Rinkunas writes that the protesters co-opt the slogan in order to attack the pro-choice movement.

In a rhetorical backwards somersault, they equate the right to go out during a pandemic with the right to abortion, while simultaneously advocating for the former and against the latter. The argument is that those who are pro-choice should be for any kind of individual choice and the implication is that it is hypocritical to have both abortion rights and a lockdown. The problem, of course, is that this conveniently glosses over the difference between public and personal health. The individual liberty framework mobilized by the anti-lockdown protesters, who also use slogans dating back to the 18th Century American War of Independence like “give me liberty or give me death”, obscures the fact that ‘my body’ is not a self-contained unit; it could infect a neighbour’s body and her neighbour’s body. ‘My death’ could mean the death of millions.

Memories aren’t neutral and the appropriation of this particular protest memory could pose a significant threat to reproductive rights. It is also worth remembering that this isn’t the first time a virus has been used to push through anti-choice legislation: American Republicans tried to prevent emergency money from going to Planned Parenthood clinics during the 2016 Zika virus. Now, while Republicans in 2020 are trying to slip anti-choice restrictions into the coronavirus relief bill, the lockdown protesters are contributing to “turning a public health crisis into an abortion debate”. To have that debate at a time when crisis legislation is used to curtail privacy, civil liberties and individual rights, could have disastrous consequences. This makes it all the more urgent to unpack what this anti-lockdown anti-abortion slogan is doing politically.

The symbolic value conferred through the memory accumulated by these slogans is an important resource in the activist repertoire. Appropriation by opposing groups works to corrode that value. It undermines their power to create a sense of belonging to a larger movement, decommissioning a key element of the repertoire.  So how can the Left defend itself from these tactics? Is it time to start appropriating the alt-right tactic of appropriation? Or to reclaim slogans by re-using them? What about ‘My Body, My Vector of Disease’? If you are worried about the data collected with coronavirus tracking apps, there is also always the slogan suggested in this article ‘My Body, My Traitor’. At least these show more critical complexity than the anti-lockdown slogans “I Want A Haircut” and “Let My People Golf”.