What does the good fight smell like? For the 2019 holiday season, well-known cosmetics franchise The Body Shop has laid claim to the answer and has bottled a “lasting warm and spicy scent” under the name ActivistTM. I recently came across this product during my Christmas shopping and had difficulty picturing what ethically-sourced pine tree this present might fit under.

The Body Shop’s new fragrance is ‘on brand’. It conveys an image that the company has cultivated for years: of being a ‘revolutionary’ cruelty-free and sustainable cosmetics producer. At the same time, it points to a wider consumer trend inspired by the waves of protest that have captured popular imagination in the past decade, from which brands like The Body Shop and Pepsi seek to benefit. The incorporation of conspicuous elements of activist counterculture into the mainstream is not just visible in retail. It is also seen in large-scale pop culture events such as the 2016 Superbowl half-time show, in which Beyoncé put on a Black Panther-inspired performance and Coldplay staged a marriage-equality rainbow wave. In ‘high culture’, one sees it reflected in curatorial decisions that are captured under the umbrella term ‘museum activism’. Where does ‘genuine’ activism end and consumer behaviour begin? Is their entanglement a sinister new development of late stage capitalism or a fluctuating fixture of political activism? Looking back at the nineteenth-century movements I study for my PhD research may suggest some answers to this set of questions.

At the turn of the twentieth century, English suffragettes and their sympathisers could signal their allegiance to the cause by wearing suffrage accessories in purple, white and green, the official colours of the Women’s Social and Political Union. These ranged from simple buttons to elaborate jewelry for wealthier aspirants, like the silver ‘Holloway Brooches’ Sylvia Pankhurst designed in 1909. In some cases, purchase of these products supported the cause of female suffrage. In others, however, profits went to high-end retailers. London jewelers Mappin and Webb, for instance, included “Suffrage Jewelry” in their 1908 Christmas catalogue, as a Vogue article inspired by the 2015 feature film Suffragette tells us (an example of a layer cake of activism and consumerism). 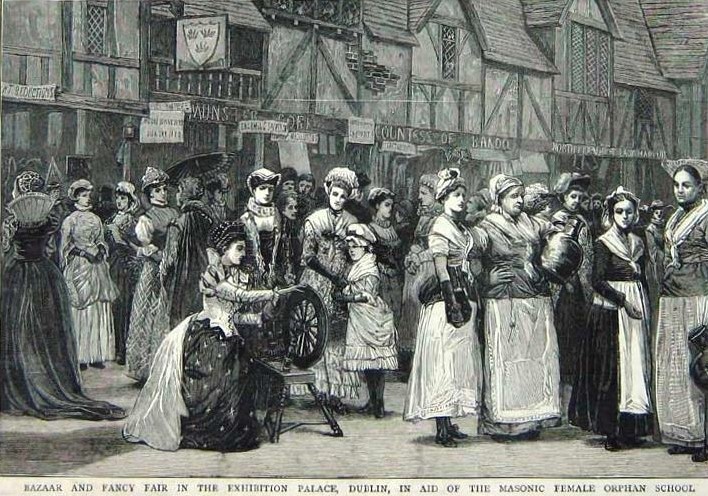 The suffragettes’ strategic merchandise drew on older traditions of women’s social engagement through display, production and consumption. The campaigns to end slavery and the slave trade involved conspicuous production and consumption beyond the halls of the charity bazaar. Some adherents chose to wear abolition jewelry, such as the ‘Slave Medallion’, a cameo which was mass produced by British pottery manufacturer Josiah Wedgwood. The popular demand for this symbol (accessory?) brought the famous movement motto (slogan?) “Am I Not A Man and a Brother?” to wide audiences. Astoundingly, late eighteenth-century British campaigns to convince women to boycott sugar from the West Indies produced a range of abolitionist crockery, bringing antislavery arguments to that European altar of colonial consumption: the family tea table.

The blurring of the lines between consumer culture and social engagement has drawn considerable criticism over the last few years. In his typically bleak 2014 opinion piece, Slavoj Žižek considers the commodification of social engagement to be a way of integrating the legacy of 1968 into capitalism. But even though anti-consumerism may have been a pillar of many hippie and student movements of the sixties, conspicuous consumption has been a component of social reform since the development of modern activism in the late eighteenth century.

What is more, the significance of production and consumption for social movements goes beyond short-term political and fundraising goals. Imagery and design features that are aimed towards broad audiences have left lasting traces in cultural memory. They produce mobile visual icons through which we often recall these movements and exert their influence on the visual language of other movements across time and space (see, for example, the wide reuse of Frank Cieciorka’s 1967 woodcut of the clenched fist salute across both serious and poppy domains).

The Body Shop’s recent allspice article, of course, has none of this expressive potential. It speaks only to the appeal of a certain self-image or species of fuzzy feeling associated with believing oneself ally to a worthy cause. The design of its plain, matte black bottle conveys a sense of laser-focused commitment, while conveniently avoiding the risk of alienating customers with reference to any cause in particular. Clever. To my mind, ActivistTM points to the curious heights the consumption-side of what seems to be an old activist-consumption seesaw, has recently taken.